To create an avenue for people to participate in political, cultural, educational, and social events to celebrate European heritage.

Today members of the White Student Union will be wearing black armbands and black ribbons to mourn for Mary Phagan. Today is the one hundredth anniversary of her brutal rape and murder in a pencil factory in Atlanta Georgia. Her manager, Leo Frank, was convicted of the horrendous crime and was put to death by a posse of Georgia citizens. The case when examined displays just the beginning of our current situation. Leo Frank was a New York Jew who came to Georgia to continue the practice of near enslavement of Southern women in factories. These women were always compensated  far less than what Northern women were (which was a pittance to begin with) which allowed huge profits to be made off the sweat and blood of the most innocent members of the Southern community. Both Northern carpetbaggers and Southern scalawags to this day have no qualms about using anyone, as long as it put money in their pocket. Many of the profits made in these factories were shipped back up North to financial bosses who oppressed the working class in the North and the South.

When Frank was on trial in Atlanta, the Northern media, liberals, and Jewish groups all attempted to corrupt the justice system of Georgia. Hundreds of these Northern agitators flooded into Georgia and raised immense amounts of money to try and set the child murderer free by manipulating public opinion. Out of this case the Anti Defamation League was founded, an organization that has been attacking Christians and white interests for a century now. What happened however is that the men and women of Georgia showed the world that they could not be bought off with thirty pieces of silver. Their child had been taken from them, and there would be justice.

One hundred years ago the people of Georgia resisted outside agitators and insidious internal influences to get justice for Mary Phagan, isn't it time we get justice for all of the victims of our people? WSU members will be wearing the black mourning armbands as a memorial to Mary Phagan, but also all of the members of the folk who have been victimized who still await  righteous justice to punish those who harmed them. May God have mercy on the soul of Mary Phagan and may God motivate all of us to fight for justice for our people. 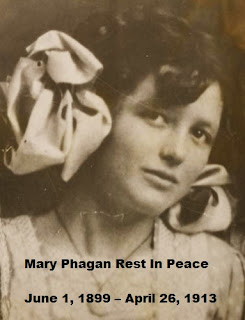 Lord God, source and destiny of our lives, in Your loving providence You gave us Mary Phagan to grow in wisdom, age, and grace. Now You have called her to Yourself. We grieve over the loss of one so young and struggle to understand Your purpose. Draw her to Yourself and give her full stature in Christ. May she stand with all the angels and saints, who know Your love and praise Your saving will. Amen.
Email ThisBlogThis!Share to TwitterShare to FacebookShare to Pinterest
Newer Post Older Post Home